Our Powertex theme for this month and last is Alice in Wonderland, the kit on offer last month was a giant pocket watch. 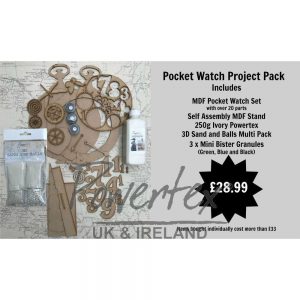 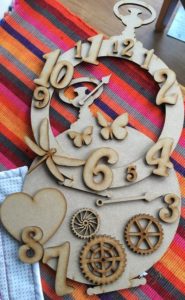 All the pieces in the kit (minus the bottle of Powertex and packet of sand and balls), I was having a ‘play’ to see what layout appealed to me. 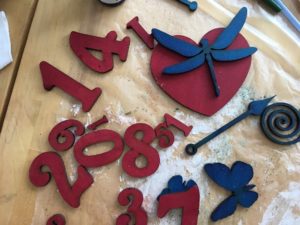 I started by painting the individual pieces with acrylic paint to try to help decide where I was going with the project.  I soon realised that I wanted to add more dimension than the elements in the kit allowed, so I set to to make a Powertex bowl.  I covered a shallow dish with cling film, as the Powertex will not ‘stick’ to plastic doing this made it easier to remove the dish once the Powertex bowl was dry.  I used t shirt fabric coated in Ivory Powertex.

This photo (sorry it’s a bit blurry) shows the ‘bowl’ after it was painted with various shades of red and orange attached to the open watch shape, I have added ‘silk’ leaves coated in the Powertex around the edge of the watch added a couple of keys and a lock.  The bottle of paint is supporting the number six whilst it dries and sets in place. 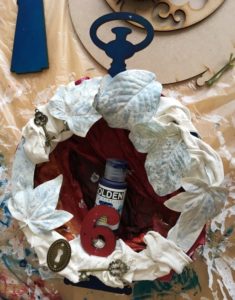 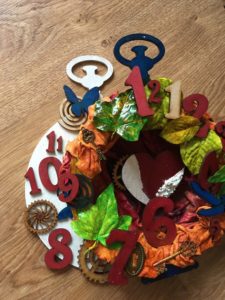 Another layout before I started working on the back watch shape. 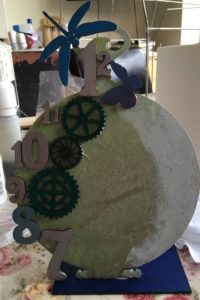 I painted the entire watch with Ivory Powertex, let it dry, then dry brushed some pigment over part of it, added the numbers, cogs and insects –  have changed the colours of the numbers, the insects have had added bling with pearl pigments brushed over them. 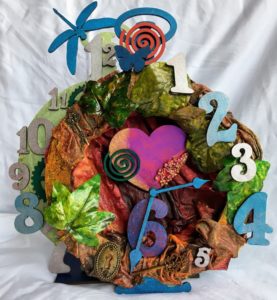